The 32-year-old Afghan migrant who plowed his SUV into a sidewalk full of Christmas shoppers in Melbourne, Australia, Thursday, has a lot in common with the more than 1,200 unwanted refugees Australia is sending to the U.S. under what President Trump has called a “dumb deal” negotiated by his predecessor, Barack Obama.

The carnage Thursday was caused by a maneuver that was “deliberate” but not necessarily tied to terrorism, Australian police said in the aftermath of the attack, which injured 18 and left a preschool boy fighting for his life in the hospital with traumatic head injuries.

Not only was the attacker Afghan (and, therefore, likely Muslim), but he has a history of mental health issues, said Australia’s chief of state police.

The suspect, whose name has not been released, is an Australian citizen of Afghan descent who used a technique, car ramming, that has been repeatedly recommended by the Islamic State over the last two years.

What should be disconcerting to every American, and what’s not being reported by the establishment media, is that the U.S. has agreed to take up to 1,250 rejected Muslim asylum-seekers off of Australia’s hands, most of them from Afghanistan and Pakistan along with stateless Rohingya Muslims from Burma and Bangladesh.

The deal was negotiated by the Obama administration, and Trump reluctantly agreed to honor it, calling it “dumb” in a tweet just weeks before taking office.

But here’s the bombshell. The head of Human Rights Watch Australia, Elaine Pearson, recently admitted to the New York Times that the mental health of these American-bound refugees has in many cases deteriorated due to their prolonged incarceration on two remote islands, Manus and Nauru, offshore from Australia.

The New York Times reported the following on Dec. 12:

“If the U.S. isn’t going to accept people from certain countries, they should make that crystal clear now so Australia can make alternative arrangements,” said Pearson, the Australia director for Human Rights Watch. “There’s no time to waste – these refugees have acute mental health problems made worse by years of uncertainty and insecurity on Manus and Nauru.”

Given that Western governments like to write off most Islamic terrorist attacks as merely a case of “mental illness,” it’s astonishing that a human-rights advocate hoping to relocate Australia’s rejected Muslim refugees would admit they are all in a dire state of mental health. 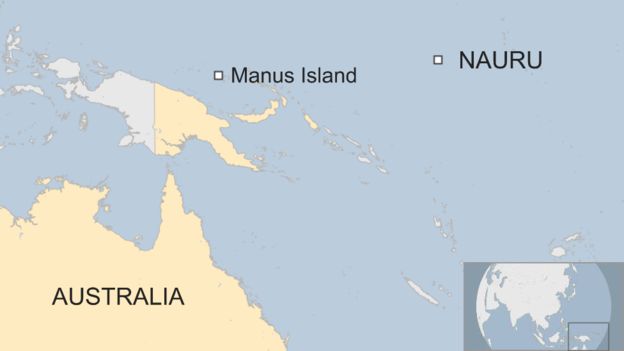 “I hope people are making the connections here,” says refugee watchdog Ann Corcoran of Refugee Resettlement Watch. “We are talking about Muslim refugees from Afghanistan, Pakistan and Burma/Bangladesh with ‘acute mental health problems.’”

The U.S. has already been acquainted with Muslim jihad by vehicle. Uzbek migrant Sayfullo Saipov launched the Halloween attack on New York City, driving his rented Home Depot truck through a crowded bike path, killing six innocent people. He arrived in the U.S. compliments of a diversity visa lottery held annually by the U.S. State Department. And a Somali refugee drove his car into a crowd of fellow students at Ohio State University last year, injuring several.

Now, back to the Australian deal. The first batch of 54 Muslim refugees arrived in the United States from Australia on Sept. 27, according to the Times. They will be followed by another 200 refugees on Jan. 12, according to the State Department. They will continue to arrive throughout fiscal 2018 as Australia empties out its detention centers of illegal boat people.

While nobody knows how many of these refugees will be violent, their profile resembles that of the Melbourne attacker who injured 18 people by ramming his car into pedestrians on a crowded street – Muslim and mentally ill.

So with the Australian human rights advocate shouting from the housetops about these refugees’ sorry state of mental health, Corcoran believes it is beyond dumb for the Trump administration to honor the deal.

“This is worse than a dumb deal, it is stunningly stupid and dangerous,” Corcoran says. “And, all to get a political monkey off Australian Prime Minister Turnbull’s back?”

Corcoran says the worst part of the deal is not only that these refugees are coming but once they get to America they will not be monitored by the government in any way. That would be profiling.

“These are mostly single men, they will come here and they will be free to roam, they’re not going into detention here like they were on the two islands off Australia,” Corcoran said.

“Is your town ready for your New Americans?” she wrote in a recent blog. “Muslim men who have mental health problems from years in detention with only other men who will be free to roam your neighborhoods.”

Then comes the question of chain migration.

Once the refugees taken off of Australia’s hands arrive in the U.S., will they be allowed to invite their relatives to join them in the U.S. from back home in Afghanistan, Pakistan, Burma and Bangladesh? It would seem they would, as preventing them from doing so would amount to “discrimination based on religion,” which is always the sticking point that seems to get Trump’s immigration policies snagged in the courts.
“This deal gets dumber every time we hear about it,” Corcoran said.

But one thing is certain. Australia obviously knows something about these refugees that makes them undesirable. They were willing to take several hundred Central Americans holed up in a U.N. refugee camp in exchange for the Muslims being detained on Manus and Nauru islands.

“We’re not taking families we’re only taking single men, which is just insane, it’s just insanity,” Corcoran told WND. “These are invaders, and no town is going to know they are coming unless someone lets the cat out of the bag. The State Department isn’t releasing where they are placing these refugees.

“They’re free then to go where they wish. Nobody tracks them, nobody knows where they are.”

This story originally appeared at WND.com

We rarely hear about the many jihadist attacks that get foiled by the FBI, which has said it has more than 900 active ISIS investigations in all 50 states. In short, the Islamic State may be defeated on the Middle Eastern battlefield, but it lives ideologically within your city or state, waiting to strike.

Such was the case in San Francisco, where Friday the FBI announced it had disrupted the plans of an American convert to Islam. In the process, we get a rare glimpse into the dark underworld of the Islamic jihadist. It’s not always the Mideast migrant who carries the mantel of violent jihad passed down through the ages from Mohammed, Abu Bakr, Omar and the long line of warring caliphs looking to establish the Islamic State.

In this case it was a former U.S. Marine marksman, 26-year-old Everitt Aaron Jameson, who had everything to live for as a young man who had served his country with honor. But he goes through a tough time with a messy divorce and converts to Islam, then plots to blow up the busy Pier 39 in San Francisco. As is almost always the case, the jihadist’s family and friends express “shock” that he could be involved in such evil.

His aunt, Sarah Jameson of Merced, told KTVU in an exclusive interview that the entire family was “shocked.”

“We knew he had switched his religion,” she said. “But we didn’t know how much it had affected him. We just had no idea. That’s not the Everett I know.”

When someone finds religion in America — whether it is Christianity, Mormonism, Buddhism or Islam — we in our Western mindset automatically think they will become more peaceful and tolerant, and the more seriously devout they become, the more peace and tolerance we would expect to see shine forth from the convert. But Islam is not like “other religions.” Not even close.

With Islam there’s always that fine line. One day he is “peaceful” and the next he is “radical.” Or so we are told. What happens in between we are almost never told, not in the mainstream media.

This ex-marine may have been depressed but he was not insane. What if he was just following the dictates of his holy book, the Quran, or perhaps he had a favorite imam who got inside his head, heaping guilt upon guilt. Perhaps we will learn in the days ahead how he got “radicalized,” unless it was at his local mosque, in which case that will be hushed up and swept under the rug. Nothing to see there fellow Americans. Move along. We prefer to have our Muslims to get radicalized over the Internet, where they have all matter of access to ISIS propaganda videos brought conveniently into all Islamic homes by YouTube, a property of Google.

Looking at Jameson’s Facebook page, it appears he had a anti-Israel, anti-Zionism bias. It is not uncommon that a Westerner who harbors anti-Semitic hatred finds his way to the most anti-Semitic religion, Islam. 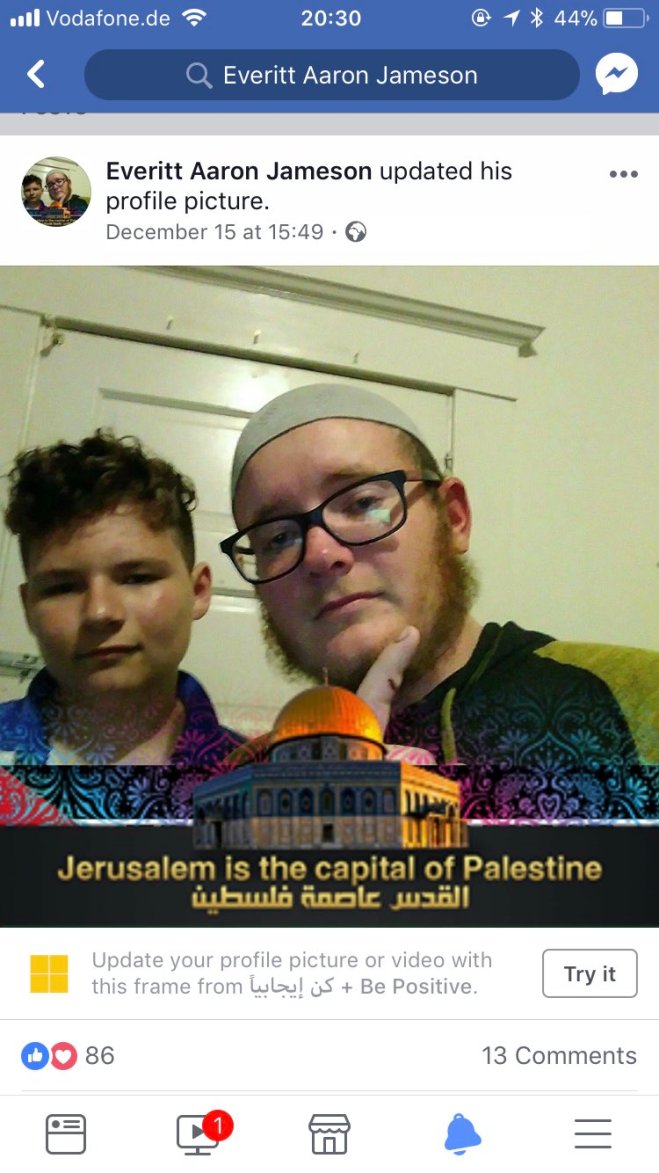 All we know for sure right now is that Mr. Jameson honestly converted, or as his aunt said, “switched” to a new religion. If Islam were a religion of peace, why does it repeatedly inspire men to do things — cowardly, dastardly things — that they didn’t feel inspired to do before they converted?

You have reached the website of investigative reporter Leo Hohmann, author of the acclaimed book “Stealth Invasion.” He tracks global migration of Islam into the West and the impact of that migration in both the short and long terms. He also keeps an eye on the behind the scenes mischief being worked to advance the road to global governance through the U.N. and other international bodies.