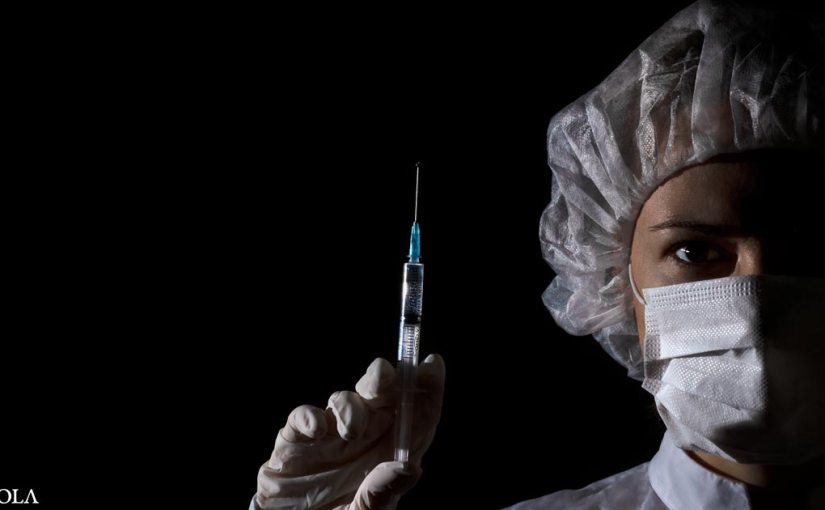 If you think the first six months of the Biden-Harris regime has brought head-spinning turns of events, from runaway inflation and open borders to a nationwide propaganda campaign for a specific medical treatment, brace yourself for more shockwaves in the second half of 2021.

The military is reportedly going to mandate the jab as of Sept 1. What happens to the soldiers who refuse? Will they be edged out and treated as deserters?

Hospitals across the country are threatening to fire their employees if they don’t take the jab, most giving a deadline of between Sept. 1 and Oct. 1. How will hospitals fill the voids if 15 to 20 percent of their medical staff quit?

Some hospital workers are already protesting.

When schools reopen this fall, school boards will be threatening to segregate children based on their vaccine status, an attempt to intimidate parents into consenting to have their kids injected with an experimental gene therapy with no data on long-term effects. The only way to stop this, according to actress and child-advocate Samaire Armstrong is for parents to be prepared to pull their children out of the public schools, thus cutting the flow of funding based on enrollment numbers.

Bank of America informed its employees that they will not be allowed back into offices this fall unless they show proof they’ve been jabbed. Morgan Stanley recently announced a similar policy and other big banks are expected to follow suit.

Mass protests are also erupting in Greece as that nation gets ready to implement restrictions on the unvaccinated, banning them from social life.

The global deep state that runs everything is pushing for somewhere between 70 and 90 percent of the global population to get injected with the mRNA treatments.

They have bribed and coerced their way to at least 50 percent in most of the formerly free nations of Canada, the U.S., E.U., U.K., Australia, New Zealand, India and Israel.

Israel is leading the way with more than 80 percent of its adults already fully vaccinated.

To reach their goals of “vaccinating the world” [to use Bill Gates’ words], the technocrats are transitioning from the carrot to the stick.

Instead of free donuts and beer, and million-dollar lottery jackpots, you will be threatened with loss of your corporate job, kicked out of public venues and harassed by door-to-door government propagandists.

They presumably already know who makes up the 50 percent of Americans who have succumbed to the relentless propaganda.

These “vaccinated” folks will be marked as candidates for full citizenship in the coming New World Order, rebranded as the Great Reset, which you can find out more about by buzzing over to the World Economic Forum’s website. There you will see how this organization has all the answers to save the world from not only COVID but climate change, digital cyber hacking, disinformation on the Internet and the whole gamut of problems that threaten our very existence.

Most of those who have already received the jab did not need to be threatened with loss of job or social status. They willingly offered their bodies for this grand experiment. They laid their individual critical-thinking skills at the altar set up by their new masters – the people who run the world’s governments, biggest corporations and Big Tech social media giants. They told us the injections would be good for us, and 50 percent of the population instinctively believed and obeyed.

I am not saying everyone who has received the jab is hopelessly relegated to a life of slavery under the Great Reset.

No, I said they were candidates for global citizenry in this new system the elites have designed for the world. They passed the first test. They were willing to throw caution to the wind and trust, implicitly, the dictates of Dr. Anthony Fauci and others who make up the medical establishment. These are the “experts” who appear daily on CNN, MSNBC, ABC, CBS. They have the blessing of Facebook-Twitter and have been anointed by the online “fact checkers” offered up by Google.

Some will surely still see the light, wake up and realize they were deceived by this vast establishment that runs all the major institutions of our society. But the majority will remain in their stupor as they slow walk all the way to their death.

As of last Friday, more than 9,000 Americans have already died, according to the federal government’s own Vaccine Adverse Event Reporting System. These deaths have been reported at a rate of more than 350 per week since the vaccine was launched under emergency use authorization on Dec. 14, 2020.

Even more will die inwardly as they surrender their souls to the beast system that is being erected by global technocrats.

The snitch network is being set up, hence the statements from the FBI encouraging people to turn in their neighbors.

Facebook is planting seeds of suspicion in the minds of its users about their online friends, grooming us to turn them in for being “extremists.” See message below that Facebook is sending to many of its users.

In her July 15 press briefing, Biden press secretary Jen Psaki admitted that the federal government is “working” with Facebook to decide what information about vaccines Americans should be allowed to see, hear or post.

“We are in regular touch with the major social media platforms,” Psaki said in a stunning admission.

Any Americans who post opinions or facts that deviate from those of the government-Facebook narrative will be categorized as “disinformation,” she said.

Since Biden is closely allied with the Chinese Communist Party, we can assume that his new department of propaganda will be putting out information that also meshes with that of the CCP about the virus and the best way to reorder our lives to “keep us safe.”

The Chinese perfected the Nazi model

The Chinese Communist Party perfected the Nazi model of government working closely with big corporations to control a nation of people. The CCP employs unrestricted warfare, which uses a multi-faceted attack on America, whether it be real estate, farmland, the media, Wall Street, clothing, medical and healthcare protocols. Everything has been weaponized with the help of globalists in the U.S. government. They aim to neutralize America with the help of Biden-Harris so they can employ their model worldwide.

The Chinese and their globalist Western partners have already released two bioweapons against the United States and the world. The first was from the Wuhan Institute of Virology in China. Phase Two of that bioweapon is the mRNA injections being given primarily to people residing in nations China considers its enemies – the U.S., Canada, Europe, Australia, Japan, Israel and India.

The Trilateral Commission, founded In 1973 by David Rockefeller and Zbigniew Brzezinski, is a technocrat think tank that perfected the high art of crisis management. If there is no crisis, you create one. Why? Because the technocrats know it’s through crises that people are able to be fear-mongered into giving up their freedom.

The bottom-line objective is to create a race of human beings devoid of a soul.

The role of ‘vaccines’ in killing the human soul

The mRNA “vaccines” make use of gene-altering technology developed over the last decade.

Depending on the instructions that you program into these mRNA vaccines, the coding can be targeted to a spike protein today, or something very different tomorrow.

But who controls the coding?

Do we know the person writing the code and do we have full disclosure regarding what that code will do to the human condition?

What’s to stop this mRNA injection or a future mRNA injection from containing a code that we’re not told of and which modifies the human genome in ways that causes certain thoughts or behaviors?

Those who instruct us to “just trust the science” could target anything they want with a hidden, undisclosed mRNA code embedded in the latest “vaccine” or “booster shot” update to a previous vaccine.

At this point the technocrat scientists and their backers in Big Government-Big Tech have declared themselves to be God. They have set themselves up not only to be God but to sit in the Temple of God, which is the human body, the Temple of the Holy Spirit.

As one of these self-proclaimed gods, you now have the power to alter the substance of that which makes human beings human. Their ambition is nothing less than to destroy the God-ordained soul, replacing it with something scientifically re-engineered by human beings playing God.

How will God judge their efforts? As blasphemy? I think so. Will He allow them to succeed for a time? I don’t have that answer.

What I do know is people without souls do not resist, do not fight.

Their bodies and their minds have been compromised, weakened. They can be programmed like a machine and updated over time according to the whims of their elite technocrat masters. Moderna’s own website describes its mRNA technology as resembling “a computer operating system” that allows scientists to “plug and play” various biotechnology upgrades over time.

They’ve already weakened half of America by injecting them with an experimental concoction of which nobody knows the contents. Whatever their magic number, 70 percent or 90 percent, this likely represents the critical mass required to transform the world and implement the Great Reset, creating a worldwide society where homo sapiens are dumbed down and reprogrammed to accept their new reality. Americans will become more like those enslaved in China, where so many have had their souls murdered by the communists and those who resist are sent to labor camps.

Don’t willingly submit to this agenda, which has never been about public health and safety. It’s about extending technocrat control.

If allowed to succeed, this demonically inspired cabal will usher the world into a new Dark Age. We must stand against them in prayer and human action. They cannot implement their agenda unless we the people submit. Stand your ground in the physical and spiritual realms. The key to victory lies in peaceful non-compliance. Whether the propaganda arrows come at you in the form of Biden’s door-knockers, a local school board, your corporate boss or unelected health department, refuse their illegitimate authority over your bodily autonomy, your personal Temple of the Holy Spirit.

LeoHohmann.com is 100 percent reader supported. To help us continue our independent journalism, free from any corporate backers, please consider a donation of any size. You may send c/o Leo Hohmann, PO Box 291, Newnan, GA 30264, or via credit card below.

59 thoughts on “Technocrats leading the world into new Dark Age: But they can’t take us where we refuse to go”