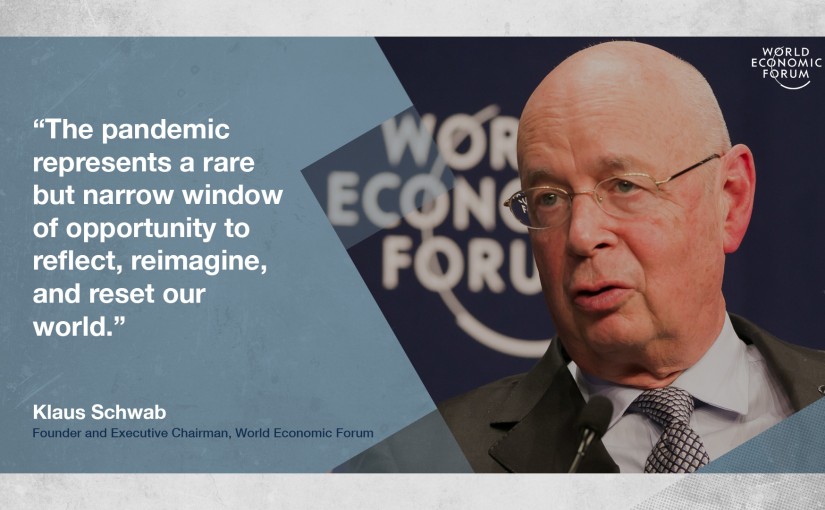 The blatant, in-your-face assault on free speech by America’s largest tech companies is about more than just stifling political dissent – it’s about advancing the agenda of globalist technocrats with designs on seizing the world economy, says Patrick Wood, founder and director of Citizens for Free Speech.

In an interview with Joshua Phillip of the Epoch Times, Wood connected the dots between the Big Tech takeover of society, the “Great Reset” being launched this week in Davos by the World Economic Forum, and the ongoing attempt to crush free speech.

It’s all part of a global revolution now in progress. Yet few people are aware of what’s happening because coverage of the Great Reset has been blacked out by the corrupt, totally controlled establishment media.

You can watch this extremely important 27-minute interview with Wood below:

This revolution isn’t being fought with guns and tanks like the revolutions of old.

Its advocates walk in the halls of the United Nations, the Vatican, the International Monetary Fund, the British House of Windsor, the World Economic Forum, the European Union and now the White House. It’s allies work in the bureaucracies of the Washington swamp, in state Capitols and some of the clueless foot soldiers who staff your local City Hall.

Many Americans can sense that big changes are on the way now that President Trump is gone and Biden is blindly signing executive orders while grumbling to his handlers that “I don’t even know what I’m signing here” [see video below].

Some may even call it a revolution, but they think it’s old-fashioned socialism that’s taking over. That’s not what Wood sees.

As he explains it, a technocracy blends certain elements of socialism, fascism and corporate crony-capitalism to come up with a hybrid system.

The technocratic idea that drives the Great Reset is to remove the concept of private property and ownership from the masses, shifting ownership to the government and the elitist corporate overlords to form a new economic system. Look for the dollar to be destroyed and replaced with a new digital currency based on block chain technology.

In this new system, people will rent the things they need – vehicles [self-driving of course], living spaces, farmland, sources of information and entertainment, furniture, any tools used for work, etc.

“But somebody’s got to own them in order for others to rent them,” Wood points out.

Those ownership rights will rest solely with wealthy oligarchs, people with names like Gates, Rockefeller, Soros, Sachs, Bloomberg, Bezos, Buffet and Zuckerberg, along with foreign investors from China and Saudi Arabia will own pretty much everything.

At a certain point under this plan, society retreats into a type of neo-feudalism.

Bill Gates is quietly buying up farmland across America, putting ranchers out of business while investing in lab-grown meat. Gates recently became the nation’s largest owner of farmland.

At the same time, the World Economic Forum has been promoting the replacement of livestock with meat substitutes such as insects and weeds. Yes, eating bugs to “help save the planet” is now all the rage in the mainstream media. Just type “global replacement of meat protein with insects” into your favorite search engine [I recommend DuckDuckGo.com] and you will see article after article about this, I kid you not.

Writer Alex Newman observed the following about the Great Reset in his recent article for the New American:

“In the not-too-distant future, you will own absolutely nothing, but you will like it and ‘be happy,’ according to the totalitarians and Deep State globalists pushing what they call the ‘Great Reset.’ You will also have no privacy, they say. Everything will change. And yet, somehow, the advocates of this communistic-feudalistic vision of the future — the World Economic Forum, the United Nations, the International Monetary Fund, the British royal family, and more — have decreed that ‘you’ll be happy.'”

If you really want to know what this new world will be like, Wood recommends reading Aldous Huxley’s 1932 novel, Brave New World.

Their goal is to shift as much of life as possible onto the Internet, leading to a virtual society run largely by computer algorithms. COVID jumpstarted this process, with thousands of people’s jobs, church services, business meetings, even weddings and funerals be conducted online through Zoom and other applications.

Once everything important is done online, it’s easier to control, as we’ve seen with the mobilization of censors who attack everyone who disagrees with the Big Tech narrative.

For those who want to believe the New York Times characterization of the Great Reset as a “conspiracy theory,” Wood advises them to check out the World Economic Forum’s Great Reset website and compare what they find there to the United Nations Agenda 2030 goals for Sustainable Development, which include a global ID system, global land management and open borders. At the state and local level, technocrats and their allies like to refer to their plans as “smart growth” and “smart cities.”

Among the things the promoters of the Great Reset want you to “give up” are your car, air travel and eating meat. The Europeans are already getting on board with this plan, according to an EU poll cited by the WEF.

In this new Great Reset environment, big business is serving as the enforcement arm of the state.

“And we see big corporations all over the world jumping on board with it,” Wood said.

Every right included in the first five amendments to the Bill of Rights is under attack, he said.

But the attack on the First Amendment rights to free speech, free press, freedom of religion and the right to redress grievances is the focus right now because once they crush that, the other rights will fall like dominos [this includes the Second Amendment right to bear arms and the Fourth Amendment guarantee against unreasonable searches and seizures].

Censorship comes into the open – and media cheers

In every revolution, be it Marxist, fascist, or otherwise, the first thing the revolutionaries do is take over the media, the TV, the radio stations, the newspapers.

“And if they don’t just squash them completely and kill them, they take over the mechanism of communication in that country. This is what’s happening in America right now,” Wood said. “Free speech is hanging by a thread, and the people in the technocratic core have a narrative they want to put forth, and it’s not our narrative. Therefore, we must be silenced.”

The most glaring example of this was how the media characterized the brutal riots last summer as “mostly peaceful” even though more than 25 people lost their lives, many of them police officers, and the rioters caused more than $2 billion in property damage. An entire police precinct was burned to the ground in Minneapolis. But this was all excused in the name of “social justice” based on the false narrative of a man being brutally crushed to death by a white cop leaning on his neck. The facts of that case did not bear out the media spin, but that didn’t matter, because the riots furthered the media-Democrat agenda of causing chaos and mayhem leading up to the presidential election. But when a small number of protesters got out of control at the Capitol, and the instigators were found to be far-left activists, the media went ballistic, again in line with the Democrats, to blame the entire event on Trump and his supporters, 99.9 percent of whom had gathered for a peaceful rally.

Now the FBI is hunting down Trump supporters and Big Tech is cutting them off from their social-media platforms, and even colluding to take down conservative platforms like Parler that don’t play along with Big Tech’s censorship game.

‘Everybody seems to be a target’

Wood said this assault on the First Amendment is not a new development.

“We’ve seen this coming for a long time, where the exercised censorship of these big platforms is increasingly worse. That’s what caused me to found Citizens for Free Speech, and now today, that collusion is in the open. When three big tech companies, the biggest of the biggest, conspire to take down a company—a competitor—in one day, this is unprecedented. This goes so far beyond any private-property issues. This is just murder, really.”

Why have the Silicon Valley power brokers decided this is the time to crush all dissent?

Wood believes the 2016 election played a role in the timing.

The big tech companies are scared to death of the populist movement in America. It doesn’t matter who leads it, Trump or some other figure, there’s nothing these elitists fear more than a popular movement of free people exercising their liberty.

“When Trump said, ‘They’re not after me, they’re after you’, there was some truth to that,” Wood said. “We see the oppression and censorship, and everybody seems to be a target now, to shut people up and keep the alternative narrative suppressed.”

And it won’t stop with the suppression of speech.

Wood predicts our every move will soon be made under the watchful eye of Big Government. As the Biden administration seeks to reregulate the economy and clamp down on dissent through hate-speech laws and other measures, government bureaucrats will collude with the technocrats of Big Tech.

“We’re going to see a massive increase in surveillance and control in 2021,” he said. “It’s already happening with vaccine passports and large companies already setting their own policies. Even if they’re illegal, they’re doing it anyway.”

Just like COVID provided the excuse to change the way America’s voting system is structured, allowing millions of questionable mail-in ballots to be used in the Nov. 3 election, the COVID crisis will also be the pretext for ignoring people’s privacy rights, property rights, even their rights to bodily autonomy.

China is the model to which every formerly free Western democracy is transitioning. Western nations gave China the technology to implement total surveillance first, and now that technology is being redirected back to the West.

“They don’t think the law applies to them anymore,” Wood said. “We’re going to see a huge increase in what I call the ‘total awareness society’ where all the places you go will track you. In Venice, for instance, they are tracking every visitor. They know exactly where they are at all times, they follow them around the city, they know what country they’re from—this is like George Orwell on steroids. It is ultimately a scientific dictatorship.”

And when corrupt government meets corrupt science, the possibilities for abuse are endless.

How to fight back

How can people stop this techno-revolution?

Wood says it will take long-term commitment, starting at the local level.

“At CFFS, we teach people to return to local activism; to get their eyeballs off of Washington, which is not going to save us out here, and to focus on their local communities. To focus on their local school boards, water boards, city councils, planning commissions, etc., to drive the ‘wokeness’ out of their own communities and rebuild the fabric of America from the ground up. Local activism is the key to it all.”

If you appreciate the independent journalism at LeoHohmann.com, which is 100 percent reader supported, please consider a donation of any size by clicking the donate button. Donations by check may be mailed to Leo Hohmann at P.O Box 291, Newnan, GA 30264.

21 thoughts on “The rise of the techno-fascist beast system is now ‘in your face’: It’s called the Great Reset”