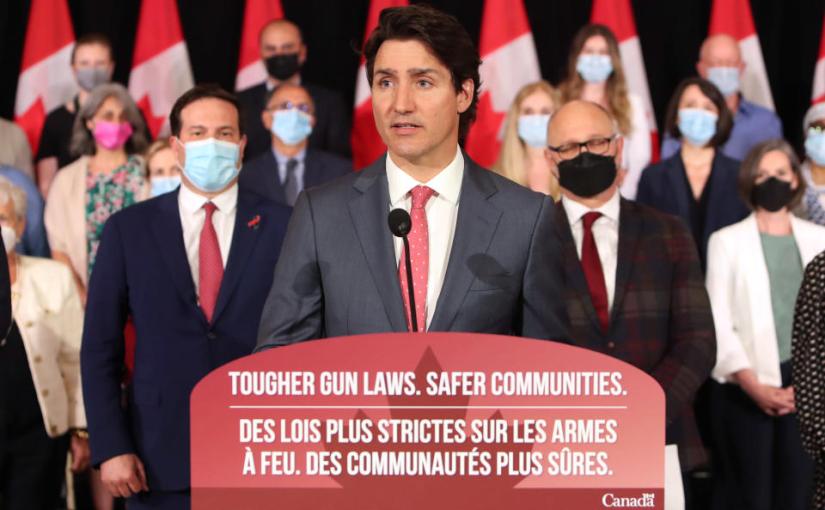 Joe Biden has used similar rhetoric; the globalists need a disarmed populace before they can fully implement the Great Reset and global totalitarianism

Justin Trudeau is telling his people that under Canadian law there is no such thing as the right to self defense, at least not if you are using a firearm as your defense mechanism of choice.

He said firearms are strictly for hunting and competition sporting events. That’s it. Listen to him communicate this message in the video below and then we will compare it to recent statements made by Joe Biden in a country that has a much stronger tradition of firearms ownership:

I wonder if this same principle applies to Trudeau’s security team. If Trudeau comes under attack from a sniper, would he order his security guards to put down their guns and defend his royal highness with their pocket knives and clubs?

Let’s be clear: If you, as a law-abiding citizen, don’t have the right to use equal or greater force against someone who is trying to kill you or your family, then you’ve not only lost your right to own a firearm, you’ve lost your right to defend yourself. The sacred right of self-defense was just tossed out the back door using clever and deceptive language.

Of course Trudeau is special and he claims the right to special privileges not afforded to the serfs. You can bet his security detail won’t be turning in their weapons anytime soon. This is the mindset of the technocratic elite. They use the same talking points for “climate change.” It’s a horrific danger that necessitates everyone to stop driving gasoline-fueled vehicles and airplanes, stop eating meat, stop doing a lot of things, while they get to continue jetting around in private aircraft and tooling around in luxury SUVs. You, serf, can hop on your moped or wait at the bus stop.

We saw the same mentality with the mask mandates. They attended their lavish parties mask free while the rest of us were threatened with fines and removed from various venues by a burly cop with a side arm and a club.

Such rules are for the little people. They are more important, more special and needn’t bother with such frivolities.

So we should not be surprised by Trudeau’s arrogant message in the above video. This was spoken like the true totalitarian thug that he is.

Under totalitarian regimes, there is no such thing as natural rights. Self defense is a natural right, meaning we have that right afforded to us by the laws of nature and of nature’s God. But under communism, fascism, technocracy and other totalitarian systems, you only have the rights that the government says you have, and such rights are always fluid, always subject to change depending on the whim of those in power.

So today Canadians were informed by their communist overlords that self defense is dependent on the weapon you decide to pick up while you are under attack. If while under attack you choose to pick up a knife, slingshot, hammer or baseball bat you presumably still have the right to fight back against your attacker, who may be armed with a Glock or a Beretta, placing you at a distinct disadvantage. Good luck, serf.

Earth to Justin Trudeau, under what line of reasoning, legally or logically, could you possibly argue your case in a court of law, that someone who is under attack from gunfire is only allowed to defend against that gunfire with a knife, a baseball bat or something that doesn’t go “bang”? This is insane. And Trudeau knows it. That’s what makes him a totalitarian.

Americans beware. We have progressive Democrats and RINOs who believe the same thing that Trudeau believes, that they, not God, get to decide what rights the people possess.

Remember, under the restructured society they call the Great Reset (aka New World Order), the globalist technocrats do not believe that we the people have any rights. We only have privileges. They do not believe we were created in the holy image of God and therefore are born with certain inalienable (natural) rights. They believe people are devoid of souls. Nor do people possess a free will. Their very existence depends on the whim of their elitist rulers and nothing is left to chance. We must be surveilled, monitored, assessed and either rewarded or punished based on our obedience to their arbitrary, selectively enforced rules.

Because they see people as wards of the state to be ruled over, they can decide who gets what privileges based on the data they are constantly evaluating.

That’s why one group can be allowed to run wild and burn down businesses and an entire police precinct as BLM and antifa did two years ago, while another group can be charged with illegally standing on the Capitol steps and left to rot in jail without trial for two years.

That’s why one group of parents can be threatened with arrest for simply attending school board meetings and voicing their concerns about their children’s education, while another group of parents can be rewarded for taking their toddlers to drag queen events. And yet another group called “Jane’s Revenge” can get away with openly calling for arson and murder if they don’t get to keep their sacred abortion rights.

We do have a Second Amendment in America which does not exist in Canada.

However, when he speaks about the Second Amendment Biden uses the same arrogant rhetoric as Trudeau. Guns are for hunting. Biden has stated that nobody needs a rifle or shotgun that holds more than 10 rounds because if you can’t hit the duck or the deer with ten rounds than “you must be a really bad shot” and need to give up hunting.

Of course, like everything else, the government-approved number of rounds you are allowed to hold in your firearm is fluid and subject to constant review. No sooner will they reduce the legal magazine size to 10 rounds and their talking points will shift to “why would any hunter need a gun that shoots more than five rounds?” Trudeau’s new gun control bill does exactly that, reducing the legal magazine size for long guns from 10 rounds down to five.

Later in the same interview on the video above, Trudeau admitted that the disarming of Canadian citizens has been a seven-year process, accomplished a little at a time in increments. (Watch the entire interview here).

“Since being elected seven years ago we’ve been steadily working on strengthening gun control,” Trudeau said.

That’s why any Republican who works across the aisle on a “compromise” gun-control bill is a sell-out because he/she knows, or should know, that the latest bill agreed to by the Democrats is just the latest turn in the screw that will eventually lead to full gun confiscation. Progressives will never rest on this issue until every citizen is completely disarmed and the only ones in possession of firearms are the police, the military and the private security guards hired by themselves.

Here in America, Biden has also said that the very idea of possessing firearms as a matter of self defense against a tyrannical government is untenable because the government “has nukes” and “F-15s.” So Biden displays the same arrogant attitude we see in Trudeau. That’s because they don’t believe people are endowed by their Creator as sovereign individuals or that politicians are elected to be public servants who represent the people. They see themselves as placed in office by wealthy elites to serve the wealthy elites and that means ruling over the people. Only a government that sees its role as ruling over us would want us to remain defenseless against tyranny.

LeoHohmann.com is 100 percent reader supported and is not beholden to any corporate advertisers or sponsors. If you would like to support us, you may send a contribution of any size c/o Leo Hohmann, PO Box 291, Newnan, GA, 30264, or via credit card below. Thanks to all who have been keeping us afloat over the last five years!

53 thoughts on “Justin Trudeau informs his subjects: ‘You have no right to self defense’”