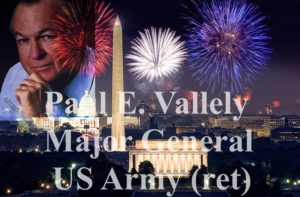 A second retired general has come out and said publicly that President Trump is all that stands between the American people and the onset of Chinese-style communism and that Trump must invoke the Insurrection Act of 1807, declare martial law and arrest the perpetrators of a coup in progress.

“This is treason,” Maj. Gen. Paul Vallely, [U.S. Army retired], told Brannon Howse of Worldview Weekend TV in a Dec. 12 interview. “We have an enemy who, with China, has created an America that I don’t understand.”

“They [China] have taken Hong Kong, and Taiwan is their next target,” Vallely said. “That’s why we have to keep President Trump. He understands this.”

Trump signed Executive Order 13848 on Sept. 12, 2018, that allows him to take action if a foreign power is determined to have interfered in the U.S. elections process. Under this order, the director of national intelligence, John Ratcliffe, has 45 days from the date of the election to submit a report determining that the election has been compromised by a foreign entity. That deadline is coming up on Friday, Dec. 18.

Trump also sidelined the CIA by invoking National Security Action Memorandum 57 on Nov. 18, right after he fired Defense Secretary Mark Esper and put all special operations forces directly under the new acting Secretary of Defense Christopher Miller. CIA Director Gina Haspel has reportedly not been seen attending daily or weekly intelligence briefings at the White House and the CIA’s new role has it relegated to intelligence gathering, meaning it has been banned from conducting major covert military operations, exactly the role that President Kennedy envisioned for the spy agency before he was assassinated in 1963.

Trump invoked Kennedy’s memorandum #57 just a couple of days before the 57th anniversary of Kennedy’s assassination.

Some see these moves as possibly part of a strategy to block Joe Biden from taking over the White House in the wake of a highly controversial election that includes claims of widespread fraud.

Whatever the case, this next week promises to be a tumultuous one.

The Electoral College is due to meet Monday, Dec. 14, and the deadline for Executive Order 13848 to be invoked is Friday, Dec. 18.

Vallely was joined on the show by his old friend Lt. Gen. Thomas McInerney [U.S. Air Force retired]. Neither one of the generals was willing to discount or debunk the idea that Trump may need to crack down on the coup plotters if America is to be saved from sliding into communism.

McInerney said the U.S. Supreme Court, which declined to hear a lawsuit against four swing states filed by Texas and joined by 19 other states on the grounds that Texas doesn’t have standing to file such a case, does not appear to see the bigger picture of what is happening in America.

“The Supreme Court of the United States said Texas lacks standing. Please. We’re not just talking about vote fraud and standing,” he said. “We’re talking about treason. President Trump must invoke the Insurrection Act, he must suspend habeas corpus, because this is the largest cyber warfare attack in history. This is Pearl Harbor.”

The mainstream media, by publishing news stories that say Trump’s claims of election fraud are “baseless,” are “complicit in the treasonous acts,” McInerney said.

“Four states all violated their constitutional rules for voting. There will be no surrender. This president, I believe, and looking at the 80 million I believe voted for him, it is very obvious this country is not going to sit back and turn it over to socialists and communists.”

Vallely had strong words for the mayors and governors who are closing down businesses and churches again, sending citizens back into lockdown. He said the president knows exactly what is going on and has intelligence that would justify a crackdown on the coup plotters, who are using COVID as part of their strategy to keep people distracted from the real danger to the republic.

“We see that with the COVID is how they are taking away the Constitution,” Vallely said. “Everything from the Supreme Court on down is so corrupted beyond the imagination. So we must stand tall against this, and you’re not going to get that from the Bidens.

“I agree [with McInerney] that it is communists and socialists” who are behind the coup.

Howse asked McInerney what martial law and military tribunals would look like and what Trump should do about the media, which has chosen sides in the dispute over the election and continues to say no fraud occurred and Biden is the “president elect”, though Trump has not conceded and the Electoral College does not meet until Monday, Dec. 14 and Congress does not open and count the votes until Jan. 6.

“What he has to do is probably shut them down,” McInerney said. “These are constitutional measures placed in our Constitution, so we are still operating under our Constitution but they are harsh measures.”

He said Big Tech – Google, Facebook and Twitter – are shutting down or censoring the president’s communications, as well as that of his supporters, and that must be stopped.

“High Tech companies are censoring against Americans’ First Amendment rights,” he said. “And at the same time we have mayors locking down cities for COVID 19. We know this virus was introduced by the Chinese at the same time the impeachment was an exercise in distraction. Dr. Fauci put $3.7 million into the Wuhan lab.”

He said martial law would not curtail the freedoms of law-abiding Americans as much as these mayors’ COVID restrictions.

“It would be far less restrictive than COVID. Antifa is going to riot and they must be crushed and crushed swiftly and violently,” McInerney said, adding:

“We’re not going to look to those governors and mayors. The Supreme Court was given a simple task, but if they think they are just looking at fraudulent voting, they don’t get it. This is treason. Martial law, the Insurrection Act and suspending habeas corpus allows you to begin arresting people right away. The penalty for treason is death, and all those people [arrested] are going to start singing.”

“There will be fair trials but they will be trying them for treason,” he explained. “How the FBI and DOJ missed it, that’s another thing that needs to be looked into. The CIA also missed it. There was too much going on. You couldn’t have missed it. I think there must have been some military involved in it. If they think this was just dirty politics as usual, no. It’s treason. And the American people should support President Trump in establishing the military tribunals.”

McInerney said he believes America is at its most important crossroads in the country’s 235-year existence as an independent sovereign nation.

“Antifa and BLM have been armed. If not dealt with this is going to be the last election we have. They’re going to win all of this. Georgia included. This is more dangerous than the civil war,” he said. “America beware. We are facing the biggest threat in American history and we have to meet that threat.”

He said naval forces and other military movements are being placed in motion to defend the country.

“The president is waiting for the right opportunity. Does this happen before Christmas? Yes. And it could happen after Christmas… The American people have to demand that he do it.

“Mr. President, you have no choice. You must defend the nation against enemies foreign and domestic. Period.”

Vallely agreed that, at this point, the civilian courts seem unable to tackle something this big.

“If the Supreme Court of the United States bends to political considerations, then the president needs to take it on with the military,” Vallely said. “I stand firmly behind the president.”

The retired Army general has posted a series of articles on his website, StandUpAmericaUS.com, that he says document the infiltration of the Chinese Communist Party into American political, business and cultural institutions. He writes:

“Today, President Trump is facing an even graver adversity: The CCP is barking at the door, ready to take over America at any moment; the swamp of D.C., colluding with the mass media, social media, high-tech giants and celebrities faked a President-Elect and rushed to shove him into the White House through a deeply corrupt election and unprecedented fake propaganda. Not only is this a time for the American people to choose their future between freedom or communism, but this is also a time for everyone in the world to make a choice between good and evil. ‘These are the times that try men’s souls.'”

He also has posted a complete list of significant claims of errors/fraud in the 2020 presidential election, as researched by former CBS News journalist Sharyl Attkisson.

McInerney and Vallely are no strangers to each other.

The two co-authored a book together in 2004 titled End Game: The Blueprint for Victory in the War on Terror, and both served as military analysts for Fox News.

“Beware America,” McInerney said. “Now is the time to stand up. Fight.”

Thanks to the amazing response from readers, we are only $100 away from reaching our goal of raising $3,000 by the end of this year. Thank you for coming through and keeping LeoHohmann.com on solid footing heading into 2020. To make a donation of any size, please click the donate button.

85 thoughts on “2nd retired general calls on Trump to crush coup plotters: ‘This is more dangerous than the civil war’”