Many writers, myself included, have tried to warn America that the situation at the U.S.-Mexican border is unsustainable and will lead to a catastrophic end game.

To call it a “crisis” – a word even Democrats are now using after first accusing President Trump of creating a “manufactured crisis” – doesn’t convey the severity of the problem. This is a catastrophe in the making. A catastrophe so large that if something isn’t done, and soon, to restore our border and enforce the rule of law, this nation will cease to exist as we know it.

Our cities will devolve into a state of chaos and lawlessness.

Conservative Review‘s Daniel Horowitz recently penned a column on “The coming crime wave that Border Patrol isn’t stopping.” In it, he describes a situation in which border agents, overwhelmed by the onslaught of illegal-alien caravans surging at the border and claiming asylum [after receiving coaching on how to do that from George Soros-backed NGOs] are unable to do the job they were hired to do. That job is to police the border and protect our nation from the illegal in-flow of gangs, terrorists, human traffickers, meth, heroin, cocaine and other contraband.

As I already said, conservative journalists have been sounding the alarm for years, both on radio and in print.

But now, a man of faith and compassion, with access to millions of Christians across the denominational spectrum, has traveled to the border to see for himself what is going on.

Dr. James Dobson, founder of Focus on the Family and a longtime advocate for children, came back and posted his findings at his website last week.

Dobson is not a man given to sensationalism, emotionalism or drama. This is reflected in the mundane title of his report, “Dr. Dobson’s Visit to the Border,” posted in his July online newsletter.

If read by enough Christians, it could be a game-changer.

Dobson cuts through the B.S. being peddled by the mainstream media and most politicians.

Dobson visited the U.S. Border Patrol’s intake center in McAllen, Texas, which is the busiest of the half-dozen or so centers along the border between Texas and California.

Dobson didn’t sugar-coat what he saw. Conditions are not good. That’s because Border Patrol, its staff, its funding levels and its facilities, were never designed to take in so many destitute migrants. We’re talking more than 5,000 a day. He described scenes filled with sad, unwashed faces, grinding boredom, and cramped quarters. But they are being fed, three meals a day, and most are sent on their merry way after being held for processing, usually about 20 days.

“They obviously care about the detainees, and I respect them highly,” he writes. “They work tirelessly feeding people three times a day and providing clean clothing. They must also maintain the portable toilets in the cells. It is a never-ending task. There are only two large showers in the facility, one for males, the other for females. Their capacity is for only 20 people at a time, which is insufficient.”

What’s the cause of these unprecedented waves of migrants from countries other than Mexico? Dobson answers as follows:

“A federal judge years ago issued a ruling called the Flores Settlement Agreement. It is still the source of many problems. It requires that any unaccompanied alien child must be released within 72 hours. This is now the law of the land, and poor people around the world know it. A single male typically seeks to find a child and a woman to help him ‘game the system.’ Clearly, many of these are ‘fake families.'”

“I was told that some of the vulnerable children are ‘recycled’ repeatedly to help men gain entry into this country,” Dobson says.

Lawyers and activists coach the migrants, telling them to claim that they are fleeing from oppression or seeking asylum.

“They are allowed to plead their cases to judges, but there are too few of them to keep up with the volume,” Dobson writes. “These people are given a court case and released. The vast majority are never seen again. Most then become ‘anchor babies’ who are citizens with rights to bring members of their families. Others are given transportation to an American city where they disappear into the culture.”

Since these temporary detention centers are filled with “fake families,” it’s easy to understand why people are separated by age. The safety of the migrant kids demands it.

All this talk about children being “ripped from their parents,” and holding centers that resemble “concentration camps” by leading Democrats is pure demagoguery. Alexandria Ocasio-Cortez is perhaps the biggest purveyor of these lies. She should be rebuked by Nancy Pelosi and other party leaders but they are afraid of her. She’s the new party boss and when she speaks, Pelosi must be ready to dance. 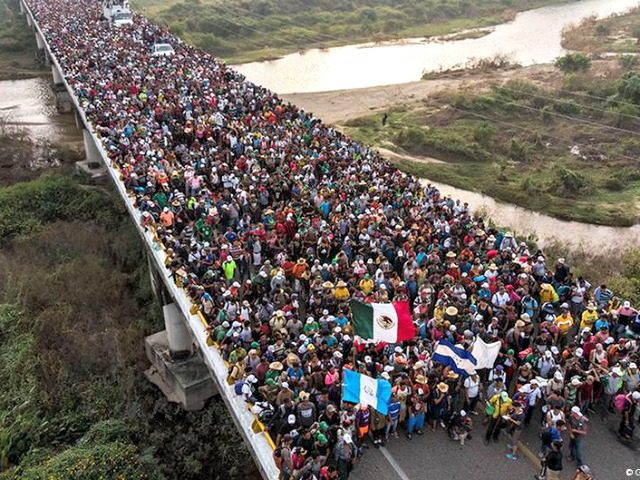 Some border hawks, such as William Gheen of Americans for Legal Immigration PAC, are not willing to let President Trump off the hook for the border chaos. Gheen believes Trump deserves at least a share of the blame for not taking more drastic action, which would be justified from a humanitarian standpoint as well as in the interest of preserving America as a sovereign country built on the rule of law. The current situation makes a mockery of the law, and doesn’t reflect compassion for the migrants, especially the children who are being used to skirt the laws and often sexually abused in the process.

About Dobson’s citing of the Flores Settlement Agreement as the pivotal reason for the crisis, Gheen told me, “I don’t believe that is true. I believe that is the current excuse for Trump’s policies.”

Whether it’s because of the Flores Settlement Agreement or something else just as sinister, the numbers don’t lie. Ten years ago, 90 percent of illegals apprehended at the border were single adult males and mostly from Mexico.

“Now, more than 50 percent show up with babies and children, and 90 percent of them are from countries other than Mexico with 64 percent being family units or unaccompanied alien children,” Dobson writes. “Together, they claim to be ‘families’ and within three weeks, they will be home free in America. Is there any doubt why there have been more than half a million illegal immigrants this year alone?”

Think about that, more than 550,000 illegal migrants crossed our border in the first half of 2019. If that pace continues, there will be more than 1 million illegal border-crossers for the year. That’s more than three times the number who crossed in 2018.

Dobson saw what was happening and why. When a nation turns its border-patrol agents into babysitters, leaving its border wide open, while offering illegal crossers free education, healthcare and other benefits, should that nation expect anything less than the tragic situation now unfolding in McAllen and the other border areas? There are simply too many incentives to come here illegally.

Dobson is clearly on a mission to sound the alarm. Below are excerpts from his report:

I speak regularly to men of faith about the situation metastasizing at our border.

Spokane, Washington-based Shahram Hadian is one pastor who gets it. A former cop, and himself an immigrant, Hadian said he was happy to see Dobson joining the fray of religious leaders who see the problem in full color at a time when many pastors are falling into deception, believing the media’s lies.

“Let me address those who believe the Bible condones us allowing all this illegal activity pouring into our nation,” said Hadian, who emigrated from Iran.

“To claim that the Bible or Jesus condones breaking the law in this manner is to claim that God is not a God of order,” he said. “There is no legal or lawful right to enter another country illegally in violation of their laws. Again, it is not compassion or biblical to have an open-border policy, sanctuary cities or flooding our cities with un-vetted refugees. All of those are signs of lawlessness, rebellion, anarchy and a pattern of biblical judgment. Those characteristics of a nation happened when that nation was in rebellion to God. These behaviors are against the Word of God. Period. We need borders, walls, and a completely overhauled immigration system that stops the flood of illegal aliens into our nation. I am all about lawful rules and compassion, both in compliance with our Constitution and with the Laws of God.”

Leo Hohmann is an independent freelance journalist, author of the 2017 book “Stealth Invasion: Muslim Conquest through Immigration and Resettlement Jihad.” If you appreciate his reports and want to help this site remain available, please consider a donation of any size.

2 thoughts on “One of America’s most respected Christian leaders returns from border visit sad, angry and sounding alarm bells”