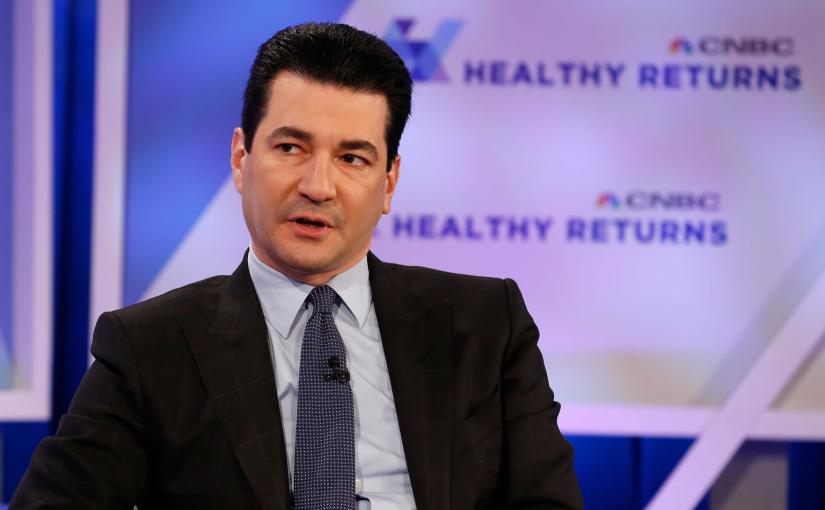 America took a giant step Monday toward extinguishing what’s left of freedom and setting up a bifurcated society in which at least a third of its population gets treated as second-class citizens unfit for employment, buying or selling.

The U.S. government crossed another hurdle in its determination to use Covid as an excuse to snuff out equality and even the pretense of individual freedom when the U.S. Food and Drug Administration granted its full approval Monday to the Pfizer so-called “vaccine.”

And now one of Pfizer’s own board members is bragging that businesses will “fall in line” and mandate his company’s pharmaceutical injection.

Scott Gottlieb, a former FDA commissioner who now sits on the Pfizer board, appeared Monday, August 23, on Squawk Box to talk about the FDA approval for the Pfizer jab just minutes before the announcement was made.

Gottlieb predicted the businesses would “fall in line” now and start to broadly mandate the Pfizer shot.

“But I don’t think there’s going to be a rush of people who have been waiting for this binary moment in time who now are going to go out to CVS and Walgreens because it’s been FDA approved.”

This injection has already killed and seriously injured tens of thousands, according to the government’s own database, the Vaccine Adverse Event Reporting System or VAERS. Along with the shots from Moderna and Johnson & Johnson, the three vaccines have killed more people, more than 11,000 at last count, than all other vaccines combined since the government set up its VAERS reporting system in 1990. That’s an undeniable fact and quite an achievement for Pfizer and company.

And yet, wearing this grotesque safety record as a badge of honor, Pfizer gets its serum approved in record time by the FDA.

This should tell us all we need to know about the state of the FDA. It has become a wholly owned subsidiary of Big Pharma. No unbiased, science-based regulatory agency could possibly approve any drug with such an abysmal safety record, let alone approve it with such lightning speed.

The average new vaccine takes at least seven years to go through the testing and approval stages.

But the FDA, clearly under political pressure, threw caution to the wind and greatly expedited the process.

This shows how desperate these mad scientists are. They knew they were losing control of the narrative that these shots were “safe and effective.” More and more Americans are waking up to the fact that they are neither. The FDA had to act and act fast. Now the shots can be widely mandated.

The consequences will be catastrophic.

Businesses, from the smallest to the biggest, will now feel free to mandate their employees get the Pfizer shot. This is a shot that clearly does not work for its intended purpose. All you have to do is look at what’s happening in Israel, which is one of the few countries offering transparent vaccine data.

More than 80 percent of Israel’s adult population has received the Pfizer shots, and yet their hospitals have been packed for weeks with sick people suffering from Covid, 40 to 60 percent of them fully “vaccinated.”

In what amounts to an admission that its vaccine doesn’t work, Pfizer has already applied for FDA emergency use authorization for a third shot, which it calls a “booster.”

Only things doomed to fail need a “boost.”

And yet, the evil arrogance of Pfizer never wanes.

But the truth about Pfizer’s corrupt dealings is starting to leak out.

According to a report by America’s Frontline Doctors, information security expert Ehden Biber said the first document to emerge detailing the agreements Pfizer has with various countries was discovered by Albanian newspaper Gogo.al.  Biber also was able to locate the digitally-signed Brazilian contract, and at least two others, one with the European Commission, and the other with the Dominican Republic, according to the report.

“If you were wondering why Ivermectin was suppressed, it is because the agreement that countries had with Pfizer does not allow them to escape their contract, which states that even if a drug will be found to treat COVID-19, the contract cannot be voided,” said Biber.

This isn’t about public health and it never was. This is about identifying, marking and segregating the population into two groups, those obedient to the state and those who they knew would resist.

The resisters are marked for political persecution. The obedient are marked for a life of digital slavery to the state and its partners in Big Pharma and Big Tech.

Divide, demonize, dehumanize, destroy. This is the goal of the global revolution now in progress. We are witnessing the globalist elites’ final power play, designed to depopulate the world and re-educate those who are left to live their lives in total submission to their new masters. They will be tracked and monitored 24/7 in real time via a digital app, which will start out on their smartphones and end up on their physical person. They will submit to continuous shots.

Joe Biden also on Monday used the FDA approval to call on more companies to step up the process of requiring their employees to get the shot.

This is the very definition of fascism — big government working hand in glove with big business to oppress the people.

War has been declared on humanity

The government’s action in granting an expedited approval to a highly questionable “vaccine” based on all-new mRNA technology amounts to an open declaration of war on the individual consciences of all free people.

America being seen as the most powerful nation on Earth, you can bet Monday’s action by the FDA will cause many other nations of the world to go ahead and replicate this reckless action, approving the Covid shots in their countries as well.

The genocide will now begin in earnest. Every politician, businessperson and bureaucrat who had a hand in this will answer to the one true God for their reckless, murderous actions that led up to today.

Australia is the model for every Western nation. Get the shot or become a non-person, unworthy of participation in society. If the global elites are successful, healthy unvaxxed people will end up being relegated to their own homes, shut out of restaurants, grocery stores, their jobs, their lives. They could potentially be herded into camps [see the CDC’s published plans for the “shielding approach” against Covid].

For those who still can’t wrap their heads around where this is heading, read the articles below and get up to date. The hour is late. We must join together and peacefully resist in unified civil disobedience, now.

Digital health passports: The snare that will lure many into the one-world cashless system

SUPPORT INDEPENDENT JOURNALISM: LeoHohmann.com is 100 percent reader supported. Unlike the mainstream media, we are not beholden to any corporate advertisers from Big Pharma. Please help us continue to bring you the honest news and analysis you need to prepare for what’s coming. Donations can be sent c/o Leo Hohmann, PO Box 291, Newnan, GA 30264 or via credit card below.