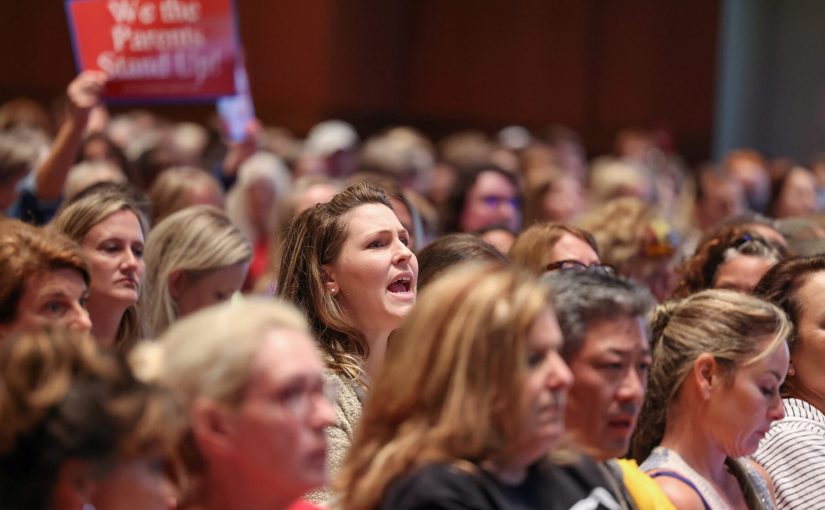 When every American county becomes Loudon County, Virginia, that’s when we will win back America. The parents there have shown how to defeat the systemic evil that has infiltrated and become ingrained in our cultural institutions over the last 100 years, starting with the education system.

It’s interesting that most of the fighters in Loudon County are female. Hats off to these brave women. They are a force to be reckoned with, and they’ve made it clear they are not about to let themselves be intimidated by that weasel Attorney General Merrick Garland, who showed just how weak and imbecilic he is in yesterday’s Senate hearing. He looked ambivalent, detached and almost childish under the pressure of sharp questioning from Senators Ted Cruz, Josh Hawley and Tom Cotton.

But the tide really seemed to turn in Loudon County when one dad came out and took a very public stand against the madness.

Infuriated by the brutal rape of his 15-year-old daughter by a boy dressed in a skirt who was allowed, per the school’s new transgender bathroom policy, into the girls’ bathroom, Scott Smith had had enough. He showed up at a school board meeting and the board members tried to dismiss him and deny him the right to speak. But he made his point. The nation saw his pain. Saw his anger. And that pain and anger became our pain and anger.

It was game over for the Loudon County school board’s disgusting and callous cover-up of crimes against more than one little school girl. I predict it’s going to also be game over for their transgender bathroom policy, and hopefully other school systems will follow suit.

It’s well past time to wake up all you dads, and even some of you sleepy granddads have enough fuel left in your tank to get engaged in your local community.

If we are going to win this war, we need some men to join the brave women in some of these battles. Get off the couch and turn off those mind-numbing sports channels. It’s late in the game of World War III, most of which you guys have slept through. But we are now in the equivalent of sudden-death overtime. Time to wave goodbye to the opium of “bread and circuses” that have been used to pacify us for way too long.

Look out Merrick Garland. You haven’t seen anything yet. We have only just begun to fight. Peaceful non-compliance is the most powerful weapon we have. The images of that dad throwing caution to the wind and saying, no, I will not be denied my constitutional right to speak out, may have been the shot fired across the bow that more dads needed to hear. Because if they don’t wake up now, it could be their daughter who gets raped tomorrow. It could be your daughter or son who gets forcibly injected at school without your knowledge.

As we exit October and look toward the bright lights of Thanksgiving and Christmas, I bring you the following jolt of good news from Christopher Wright in Virginia:

Attorney General Merrick Garland came in for some tough questioning on Capitol Hill yesterday, when he refused to retract his memo calling for the FBI to investigate parents who object to school board policies as domestic terrorists.  Senator Chuck Grassley accused Garland of politicizing the Justice Department and said the memo ”looks like something that would come out of a communist country.” …”Thank God you are not on the Supreme Court,” Senator Tom Cotton said.

Garland may have demurred, but the fallout from the situation continues.

State school board associations in Ohio and Missouri severed ties with the National School Boards Association which wrote the letter that resulted in Garland’s memo, a letter the national group later apologized for.

Parents blasted the Loudon County, Virginia school board, which is ground zero in the whole controversy, for failing parents and students.

“We will not stand by while our children are being harmed, mentally, spiritually, and even now physically by your mismanagement, malfeasance and evil policies,” one dad – excuse me, “domestic terrorist” – said.

Five former Virginia Attorneys General called for an investigation into the school board’s cover-up of transgender sexual assaults which occurred in county schools and were not reported as required by state law.  Hundreds of students walked out of Loudon schools earlier this week to protest the schools’ handling of the transgender assaults and to express solidarity with the victims.

Well, well, well – just when the Left thought it was within inches of completely smashing the political Right forever.  Not even close.  People are fighting back against left-wing tyranny on other fronts, as well.

Another alliance – Christian business owners – sued the Biden administration for attempting to force them to pay for gender transition surgery against their religious beliefs.

A Texas border county overrun by illegal aliens voted to sue the Biden administration for failing to enforce immigration laws – you know, that pesky little thing in the Constitution requiring the President to faithfully execute the laws?

Back on the school front, a parents group sued a Massachusetts school district for holding racially segregated events for students in violation of the Equal Protection clause.  A North Carolina school board announced it would fire teachers who teach critical race theory (CRT) and trash America as racist.  And parents sued a school board near Philadelphia for silencing, shouting down, and badgering them at school board meetings.

You lefties like memos?  I’ll give you a memo: you’re on the wrong track and people aren’t putting up with your tyranny, anymore.  Capture all the institutions you want, we are building new ones and you will never subdue us.

Christopher Wright is a retired attorney living in Virginia. Read his entire article at The Daily Skirmish.

LeoHohmann.com is 100 percent reader supported and brings you the story behind the story. We need your support to stay online and donations of any size, are appreciated. You may send c/o Leo Hohmann, PO Box 291, Newnan, GA 30264, or via credit card below.

47 thoughts on “‘We have only begun to fight’: Loudon County’s battle to save its children took a turn when this one thing happened”