‘The silence and hypocrisy of the world is sickening’

It’s been building for decades, but never has the anti-Christian bigotry of the global elites who run the world’s major media outlets been more obvious than it is today.

At least 359 Christians, including four Americans and 45 children, were massacred at three churches and several hotels in Sri Lanka on Easter Sunday, many of them as they were worshiping their Risen Savior. Another 500 were injured in the attack, carried out by a team of Islamic jihadists strapped with suicide-bombs in what was described by authorities as a “coordinated attack.”

These are staggering numbers. Yet, compare the world’s response to this attack on Christians to that of the attack on two mosques in New Zealand last month, when a lone madman shot and killed 50 Muslims. Coverage of the mosque attack consumed the media for more than a week. They sent reporters to interview the survivors and communicate in great detail the agony suffered by the victims, who were clearly and repeatedly identified as Muslims.

There were calls for prayer and solidarity with Muslims in cities across the U.S., Canada and Western Europe. The Council on American Islamic Relations, also called CAIR, called on state and local police to provide extra protection for mosques across the U.S. Donations were gathered up for the families of the 50 Muslims who were murdered. 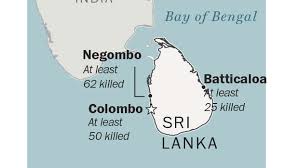 In Sri Lanka, where a much larger event has played out, we’ve seen a very different response from the corporate media and the leftist politicians they adore.

CAIR and its Democrat allies screamed “Islamophobia!” and “white nationalism!” in regard to the New Zealand attack. But these same folks have largely avoided any reference to the 359 victims in Sri Lanka as “Christians” and downplay or ignore the “Islamic” connection of the perpetrators. Those attacked while sitting in their churches have been called “foreigners,” “worshippers,” “victims,” “people” and “people of faith” — anything but Christians.

Barack Obama referred to them as “Easter Worshippers.” Hillary Clinton and other Democrats did the same, as you can see in the tweets below.

The attacks on tourists and Easter worshippers in Sri Lanka are an attack on humanity. On a day devoted to love, redemption, and renewal, we pray for the victims and stand with the people of Sri Lanka.

On this holy weekend for many faiths, we must stand united against hatred and violence. I'm praying for everyone affected by today's horrific attacks on Easter worshippers and travelers in Sri Lanka.

On a day of redemption and hope, the evil of these attacks on Easter worshippers and tourists in Sri Lanka is deeply saddening. My prayers today are with the dead and injured, and their families. May we find grace.

There have been no candlelight vigils and around-the-clock reporting on this massacre by the cable-news networks.

When national and international leaders speak, we must pay attention. Their relative silence also speaks loudly.

I believe they are laying the foundation for a global crackdown on Christianity, a crackdown that is already underway in countries as diverse as China, France, Germany, Nigeria, Pakistan, Egypt, the Philippines, Malaysia and Indonesia.

The same Christophobic war on Christianity will arrive soon in a city near you. “Soft” persecution has already caused conservative U.S. Christians to lose jobs and to be passed over for promotions simply because they are pro-life, believe in the sanctity of marriage between a man and a woman, or stand against creeping Sharia in their communities. This soft persecution will turn hard soon enough, just wait. For a preview of what’s coming, take a look across the big pond at the formerly free countries of France and Germany. Churches are desecrated there every day. Pastors are attacked.

Are you ready for it?

On Monday morning, 24 hours after the murderous attack on Christians in Sri Lanka, most of the media had finally admitted this was an Islamic-inspired operation. But CNN was still agonizing over exactly who was responsible for the carnage.

In an article headlined “Mystery surrounds the source of the Sri Lankan attacks” CNN national-security reporter Peter Bergen called the terrorists “religious extremists” but couldn’t bring himself to pin it on Islamic terrorists, preferring instead to describe the attacks mainly in the context of Sri Lanka’s history of civil war. Never mind that its civil war ended 10 years ago!

Where are the gritty reports from the scene?

The media has given few descriptive details on this attack. I have not seen any of the heart-wrenching personal interviews with victims like I did from reporters on the ground in New Zealand. You don’t get the feeling that the media’s heart bleeds for these Christians the way it did for the Muslims.

To find out what actually happened on that Easter Sunday morning I had to hunt for details.

I found some in a response from Barnabas Aid, a UK-based Christian relief organization that has sources on the ground in Sri Lanka. They sent me the following account via email:

“Yesterday morning on the beautiful island of Sri Lanka, the ugliest of violence broke out as a wave of bombings targeted Easter Sunday worship services and Easter breakfast buffets at hotels for Christians who had completed all-night vigils. At least 290 people have been killed and 500 injured, but the tallies are constantly rising. ‘This was a sad day for Sri Lanka and especially for the Church in Sri Lanka,’ wrote Godfrey Yogarajah to Barnabas Aid within a few hours of the attacks. He is deputy secretary general of the World Evangelical Alliance and general secretary of the National Christian Evangelical Alliance of Sri Lanka.”

Islamic terrorists, some two dozen of them, targeted two Catholic churches and one Protestant church.

One of the churches was Zion Evangelical Church in the city of Batticaloa.

Barnabas Aid has close ties with this congregation of 400-plus people and has been helping war widows at the church for several years. Around 35 people were killed Sunday at Zion Church, many of them children.

“Church leaders had spotted a suspicious person in the building before the service and sent someone to question him and get him out of the building. The suicide bomber exited as requested and detonated himself outside, in the grounds of the church, where the children were playing while they waited for the service to begin. Zion Church, whose congregation is mainly poor and needy, has asked Barnabas Aid to assist the bereaved families with funeral costs, and we will be sending these funds tomorrow. Help will also be needed with medical care for the injured at Zion Church and in other parts of Sri Lanka. Please pray for the suffering and grieving Christians in particular those mothers who lost their husbands and now have lost children too.”

For any journalist looking to humanize what happened in Sri Lanka, the stories are there. You just have to look for them. Funny how the American “journalists” spent well over a week looking for tear-jerking stories when it was Muslims who got killed but they can’t seem to find the time for Christians.

Newsmen like Peter Bergen would rather wax eloquent about the history of violence in this small island nation, where Christianity was introduced by the Apostle Thomas, who died a martyr for his Christian faith in neighboring India.

Why is the source of Islamic violence such a “mystery” for Western newsmen like Bergen? These are presumably smart men, yet they can’t get their head around the Islamic scriptures and understand why a sharia-adherent Muslim would kill Christians, Jews or other “disbelievers.”

Muslims who live under the yoke of Sharia have it drilled into their heads five times a day, 365 days a year for as long as they live on this earth that non-Muslims are “less than” and must either convert to Islam or submit and live as subjugated “dhimmis.” The only other alternative for Christians in many parts of the world is death.

I could go on but you get the picture. Yes, the Old Testament of the Bible also contains violent passages, but these passages describe very specific divine orders for a very specific time — a time 2,500 years ago when Israel was governed as a theocracy. By contrast, the violence of the Quran is prescriptive and open-ended. Any imam, if he is honest, will tell you that when a later verse given by Muhammad, after he migrated to Medina, conflicts with an earlier verse given to Muhammad in Mecca, the later verse takes precedence. This is called the doctrine of abrogation. It is in these later verses where Muhammad called for the destruction and subjugation of all Christians and Jews who persisted in rejecting his new religion.

Shahram Hadian, a pastor at the Truth in Love Project in Spokane Valley, Washington, and a former Muslim who grew up in Iran, described the attitude of America’s leftist establishment toward growing Christian persecution in a Facebook post Sunday, the day that saw mass casualties of Christians in Sri Lanka:

“Where is the outrage of the left and all of my ‘liberal’ Christian brothers and sisters, who were incensed after the attacks in New Zealand. The entire world ‘stopped’ and mourned after those attacks. Will we see the same here?

“Will our governments now call for the Lord’s Prayer to be read over the radio and air waves, as we saw the Islamic prayer of azan broadcast over the airwaves in New Zealand, after those attacks?

“Where is Ilhan Ohmar and Rashida Tlaib? Must be that ‘some people did something’ in Sri Lanka. The left is too busy protecting Islam while it gets taken over by Islam.

“Is [Minnesota] Attorney General Keith Ellison (Muslim Brotherhood) and other elected officials in Minnesota going to set up a Christophobia task force to investigate attacks against Christians and churches like they did after New Zealand? Of course that will never happen. The silence and hypocrisy of the world is sickening.

“The Lord Jesus Christ will not forgot and He will avenge the blood of His Martyrs,” Hadian said, citing Revelation 6: 9-11.

The words of Jesus, just before His arrest and crucifixion, also come to mind. He warned His disciples, as they ate the Passover meal together, “If they persecuted me, they will persecute you also.” (John 15:20).

Leo Hohmann is an freelance writer and journalist, author of the 2017 book “Stealth Invasion: Muslim Conquest through Immigration and Resettlement Jihad.” He is working on a follow-up that will investigate the Interfaith movement, which is ushering false and antichrist ideas into Western churches. If you would like to support this project, please consider a donation of any size.

15 thoughts on “Are elites setting the stage for a global crackdown on Biblical Christianity?”